South Korea has been put on "Red Alert" 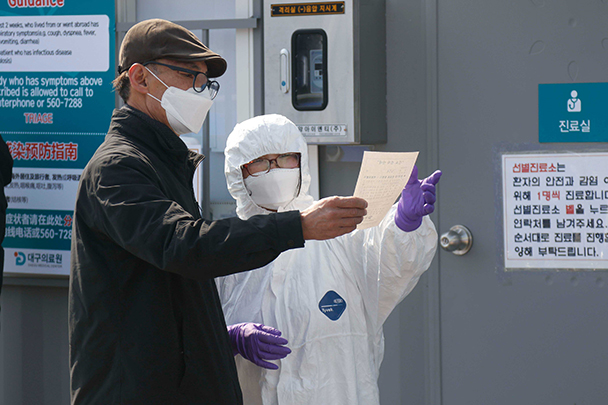 The spread of the new coronavirus has intensified around the world. Reports indicate that the number of cases more than doubling to 433 in South Korea.

South Korea announced 231 new cases today, with the nationwide total surging past 830. More than half of those are associated with a branch of a religious group.

South Korea has raised its disease alert to the highest level after a surge in coronavirus infections and two more deaths, while Chinese state media warned the outbreak had yet to reach a turning point despite some signs of easing.

South Korea’s president said on Sunday he was putting the country on “red alert” due to the rapid rise in new cases, which are largely being traced back to church services. Health officials reported 169 new infections, bringing the total to 602, having doubled from Friday to Saturday.

Daegu city and Cheongdo county were designated “special care zones” on Friday. The escalation in the alert level allows the government to send extra resources to these zones.

South Korea’s Yonhap News Agency said it also enables the government to forcibly prevent public activities and order the temporary closure of schools, though the government gave no immediate details on what steps could be taken.

South Korean President Moon Jae-in said the country was at a “watershed moment” Sunday, as he issued the highest level of national alert and ordered new resources to tackling the outbreak, which is largely focused on the southern city of Daegu but has spread throughout the East Asian country, including among the military.

The Ministry of Defense of South Korea confirmed Monday that an additional four soldiers had been confirmed to have contracted the virus. It brings the total of military personnel to 11. There are fears that the outbreak could spread quickly among troops living in close confines, and potentially spread to US forces stationed in Korea.
Main Reference
corona| Coronavirus| covid-19| news| red alert| South Korea| spread|