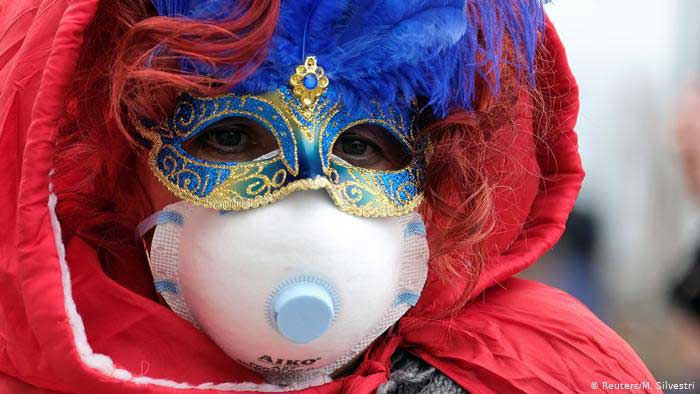 Italian authorities have announced sweeping closures in the country’s north as they scramble to contain Europe’s biggest outbreak of the novel coronavirus.

Italy’s confirmed cases surged from three on Friday morning to more than 200 by Monday.

The majority of coronavirus infections are concentrated in mainland China (with more than 77,100 cases), followed by Japan (840) and South Korea (833). Italy’s spike now marks the biggest outbreak outside of Asia.

Five people have died and at least 219 others have been infected with the virus in Italy. The bulk of the cases (167) are in the northern region of Lombardy, whose capital is the city of Milan.

Borrelli added that one person had recovered and that 91 people with the virus were currently in isolation at home.

Officials have yet to track down the first carrier of the virus in the country. “We still cannot identify patient zero, so it’s difficult to forecast possible new cases,” Borrelli said.

Strict emergency measures were put in place over the weekend, including a ban on public events in at least 10 municipalities.

Italy’s Health Minister Roberto Speranza announced severe restrictions in the affected regions, which included the closure of public buildings, limited transport, and the surveillance and quarantine of individuals who may have been exposed to the virus.

Nearby countries within the borderless Schengen Area that covers most of western Europe have gotten jittery over the spike in Italy’s numbers.

Sports and fashion affected in Italy

Italy’s top soccer league, series A, canceled at least four matches scheduled to be played in Lombardy and Veneto regions.

The country’s fashion capital, Milan, announced it would close its schools starting Monday for a week. School trips inside and outside Italy were also being canceled from Sunday, according to a statement by Italy’s Ministry of Education.

The spike in numbers has also affected the end of Milan Fashion Week. Fashion houses Giorgio Armani and Laura Biagiotti confirmed to CNN that they will be holding Sunday’s fashion shows with no spectators and behind closed doors.

Venice Carnival is being suspended in the face of the outbreak. Two of the region’s 25 cases occurred in Venice, the popular tourist destination whose carnival celebrations attract visitors from across the world.

As worries grow in Italy’s north, authorities in the country’s south put a migrant rescue ship in quarantine in Sicily, the interior ministry said Sunday. The Ocean Viking, which has 274 migrants aboard who were rescued at sea, is quarantined in Pozzallo, Sicily, along with the ship’s crew.

Window of opportunity is narrowing

The situation has raised fears about the spike in cases outside mainland China among people with no connection to China or the city of Wuhan – ground zero for the outbreak.

World Health Organization Director-General Tedros Adhanom Ghebreyesus reiterated on Saturday that there was still a chance to contain the virus beyond China, “but the window of opportunity is narrowing.”

“Although the total number of cases outside China remains relatively small, we are concerned about the number of cases with no clear epidemiological link, such as travel history to China or contact with a confirmed case,” he said.

The increase in cases in middle East, South Korea and Italy “is also a matter of concern and how the virus is now spreading to other parts of the world,” Tedros added.