Demodex Mites and Their Symptoms

Demodex is a genus of mites that lives predominantly near all mammals’ pilosebaceous units. So far, scientists have identified 65 species of them, among which folliculorum and Demodex Brevis are the only species that live on humans. They usually move between the skin’s surface and its depth. Demodex mites crawl with eight stubby legs clustered in their front third, spread through the skin’s pores, and fit deep into the follicles and sebaceous glands. These parasites tend to avoid the bright lights, spend most of their time hooked under the skin, and only come to the skin surface at night.

Although Demodex infestation usually remains asymptomatic, they may be responsible for exacerbating skin lesions when they grow in number. The symptoms usually occur when there are more than five mites per square centimetre of skin.

Demodex mites can aggravate, mimic or even cause the following concerns:

How to Diagnose a Demodex Mite Infection

Since they are only 0.1 – 0.4 mm long, observing and counting Demodex mites with the naked eye is impossible. Rather, scientists have designed indirect methods to track down, detect, and count them. Sampling and counting parasites under a microscope is a standard method employed in various studies. An online test, on the other hand, examines the severity of symptoms as well as the mites’ growth aiding factors using a questionnaire.

Each of these methods (microscopic Demodex diagnostic test and online quiz) has its pros and cons, which we will examine.

SSSD is the gold standard technique for diagnosing Demodex infection, which is performed in the following steps: 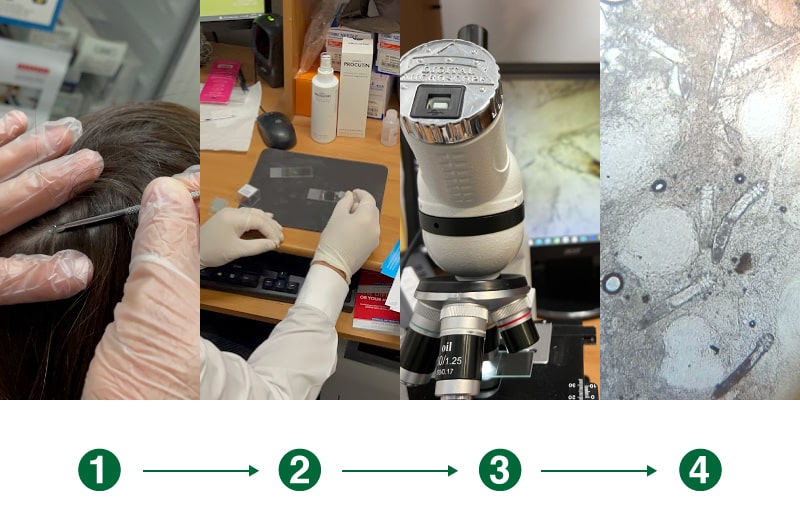 DME is another valid microscopic test to detect demodex infection:

The dermatologist diagnoses Demodex infection in both microscopic methods if the number of parasites exceeds 5 per square centimetre.

Demodex Online Diagnostic Test is a questionnaire consisting of multiple-choice questions. These inquiries examine the symptoms of Demodex as well as the elements that assist them in growing. For example, pruritus, rosacea, and dermatitis are Demodex parasite infection symptoms that the online test measures. On the other hand, factors such as weak immune system, being old, poor mental status, etc., significantly impact the Demodex mites’ population. By examining all these factors in total and assigning different weights to the answers, this questionnaire examines the individual’s status in terms of Demodex infection. It provides the results in four tiers immediately after the test. The green colour, which indicates the low density of Demodex, is the most favourable condition, while yellow, red and purple indicate moderate, high and very high numbers of these parasites, respectively. Individuals with a high Demodex density would better seek a solution to control them abruptly.

Ungex products, including PDT and SDT, are specifically formulated to solve the Demodex-originated problems and even prevent them. Individuals with a moderate density of parasites would better stop Demodex from overgrowing by applying these products once a week.

In contrast, online testing does not have the shortcomings of microscopic testing, but it may seem unreliable because it is not based on observation. However, our studies in recent years have revealed that online testing accurately estimates the density of Demodex. This test is available anywhere in the world for free and helps all those who suffer from skin problems to evaluate their Demodex mite’s density.

4 thoughts on “Demodex Test: How to Diagnose Demodex Mite Infection”