In this post, we will look into a common symptom that often goes unnoticed because it those who have it don’t really know how to resolve the issue. This symptom is known as ‘crawling sensation’. SDT is the most effective product to overcome crawling sensation and itchiness, ORDER NOW.

What is Crawling Sensation?

Crawling sensation is the feeling of tiny insects crawling across or underneath the skin. Also known as ‘formication,’ this symptom has no physical signs and can drive people crazy due to the itchiness, distracting many from being able to focus on certain tasks.

Formication is a well-known condition and can have a variety of causes. The word is derived from Formica, the Latin word for ant.

Is Crawling Sensation a Real Disease?

Some doctors interpret this feeling as a tactile hallucination. Still, it can be categorized as a real disease when it became a symptom of Parkinson since it brings the feeling of “pins and needles.”

Formication can have different reasons. Physiological conditions such as a decrease in hormones at the onset of menopause are among the reasons for crawling sensation.

Also, anxiety, fibromyalgia, Lyme disease, diabetic neuropathy, and some types of skin cancer cause this sensation.

People who quit alcohol may have formication with the visual hallucinations of seeing insects.

The use of psychotropic drugs such as cocaine, ecstasy, crystal meth, etc. can also cause such a sensation.

It is interesting to know that in a case study, it was reported that a woman with severe formication had bird mites.

Also, the clinical manifestations of Demodex in humans can be accompanied by a crawling sensation.

In many cases, formication is most common at night.

Demodex is a mite that has long-lived as an ectoparasite on mammalian skin. Two of these microscopic parasites are native to the human body. They are present on the skin of most people: Demodex folliculorum and Demodex brevis.
Reasons such as weak immune system, underlying diseases such as infection, etc. cause these mites to reproduce too much. In this case, their number exceeds 5 per square centimeter of skin.

As these mites move on the skin with their eight short legs, especially at night, the crawling sensation is one of the symptoms of the widespread clinical manifestations of Demodex.

As mentioned, the crawling sensation is a common symptom of a serious Demodex infestation.

For those suffering from crawling sensation and itching due to an increased population of Demodex mites, we at Ungex have researched and developed a range of treatments and care plans that help cut Demodex food source to create an uninhabitable environment for these mites.

Ungex products target Demodex on the skin and hair follicles, but they also relieve and alleviate itching sensations.

Here we have some testimonial of customers who uses Ungex products for their crawling sensation: 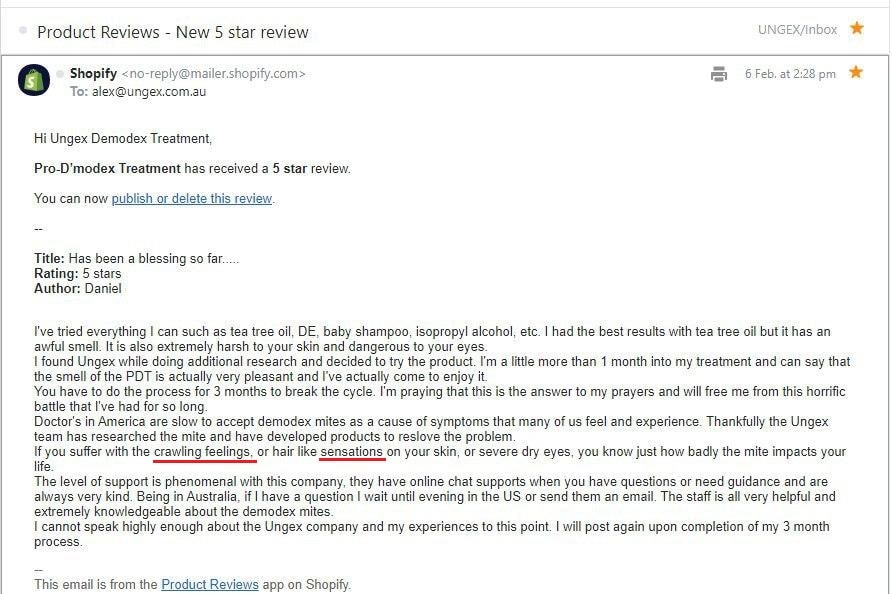